I bought SuperVair from Arch!!!   I have not picked it up yet.   He is making it more badass for me.
During the 90's I owned a vairy bad ass Crown car that I called Vairy V8. I bought it with the previous owners motor  in it...blown 392 Hemi. The headliner was scorched from the blower sneezing on the line at a local drag strip.

For the last 12 years I've been campaigning a stock configuration 65 Corsa in the landspeed racing world. My best speed is 148.253 mph in 1  1/3 mile at El Mirage dry lakebed here in Southern California. That was with a hot rodded 140 intercooled turbo motor on gas...currently building a 500 horse alky T04B turbo motor. The fun part (besides the 3 liter monster motor) is the 915 I've engineered into the car for an O/D gear at Bonneville.

Anyway there definitely is a tube chassis BBC/ADE ground up I build everything SuperVair clone in my future. I wont be done with landspeed until I go 167 at El Mirage & 187 at Bonneville and ultimately 200 mph.

I started out running in production classes where nothing but factory body parts may be used. When I started going faster I felt the need for more safety in an aero package than the stock chin spoiler could provide. I don't know why GM called it a spoiler as it is an air dam. My fastest pass of 148.235 mph at El Mirage in So Cal was run as an F/BGALT car. F is 2-3 liter, B is blown, (no distinction between turbos and blowers) G is gasoline, ALT is the second level of three levels of aero packages allowed. The new motor will use methanol so I'll run in F/BFALT.

The speeds I'm looking for are 167 mph at El Mirage and 187 mph at Bonneville. They will not be records but will be the fastest ever passes by a stock configuration Corvair. There have been a couple Covairs that have run well past 200 but all had V8's in them. The 167/187 numbers were run by Ron Cohn in the seventies. Tom Keosababian is in the B/V record book at 173.090 mph. That record was grandfathered into the Classic (1950-80 cars no electronics) category under Gas Coupe...the lowest level of aero package. The Cohn records were eliminated when the SCTA-BNI seperated gas and fuel. The record in the classes I'm actually running are all 250+ mph. That is never going to happen so my goal is to become the worlds fastest Corvair. Although the F/CBFALT number is soft at 135+ mph.

As you can see the rule book is a dominant factor in landspeed. We also have the strictest safety requirements in all of motorsports. As an example I wear a three layer top fuel fire suit just because of the turbo. Right now the plan is to shake down at El Mirage next May or June and make the September USFRA Bonneville event. I don't go to SpeedWeek in August anymore...it's a zoo.

I do have the parts to build a 220 cube Corvair engine. As you know there is no substitute for cubic inches. If a billet cylinder head project ever gets off the ground I will make an attempt at 200 mph. But currently there is no such thing as a modified stock Corvair cylinder head that could support 220 cubes at 8K+ rpm.

Every possible combination of vehicle races in landspeed. From mine to Danny Thompson and his Dad's Challenger II with everything in between. I have a friendly competition going on with my buddy Frank Sloan and his Cosworth Vega. We run just about the same speeds and he is winning with a one mph advantage right now. I invite you to meet us at B/V next Sept. There is only one place in the world you can see and hear a twin big block streamliner going by at 450+ mph. B/V is a car guys bucket list item. There are currently a half dozen 500 mph efforts underway. First one to 500 wins!!!

October, 2017 - Phil Takes The Supervair To A Corvair Show 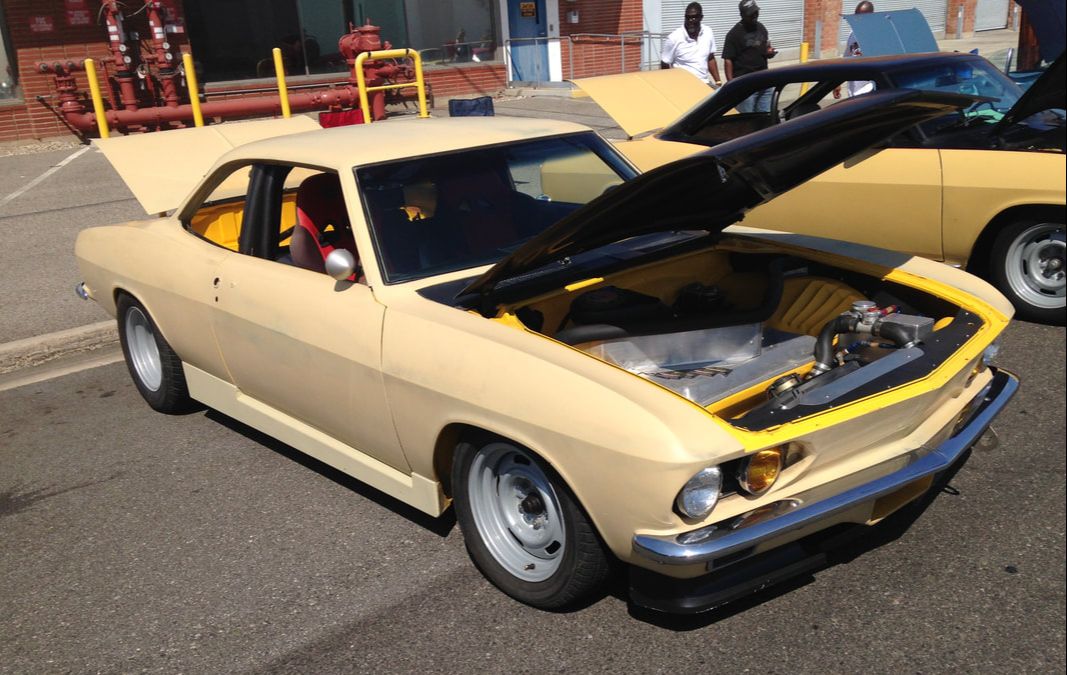 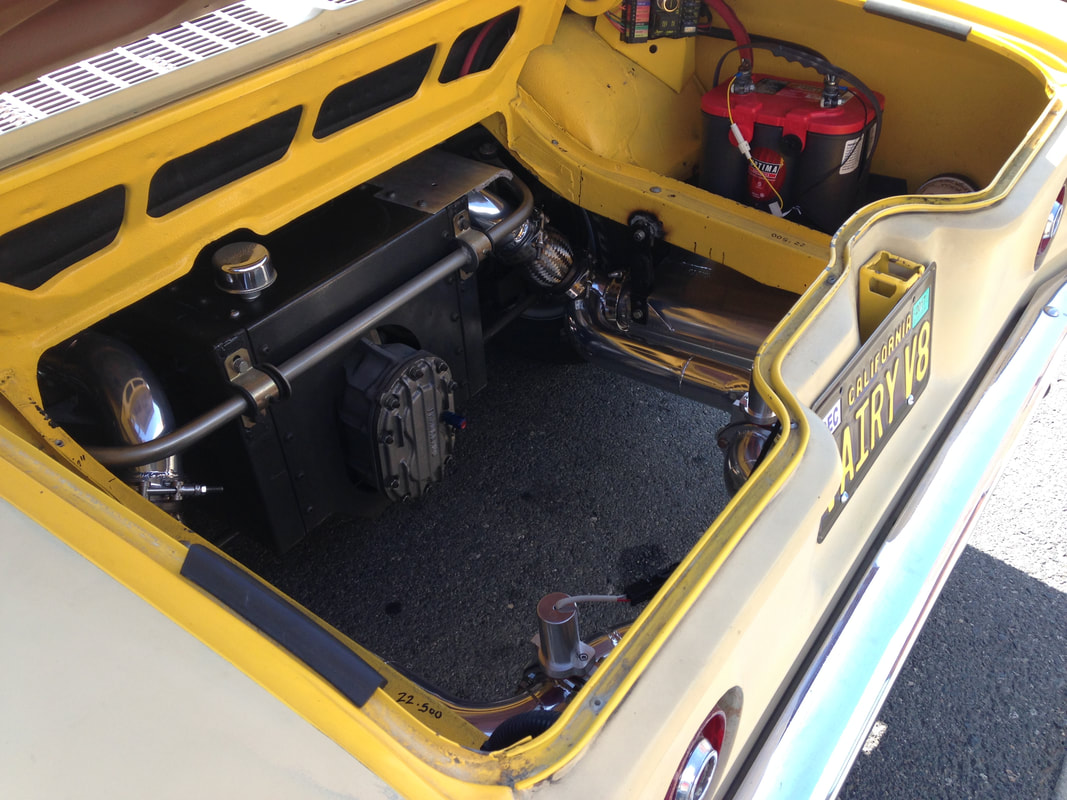 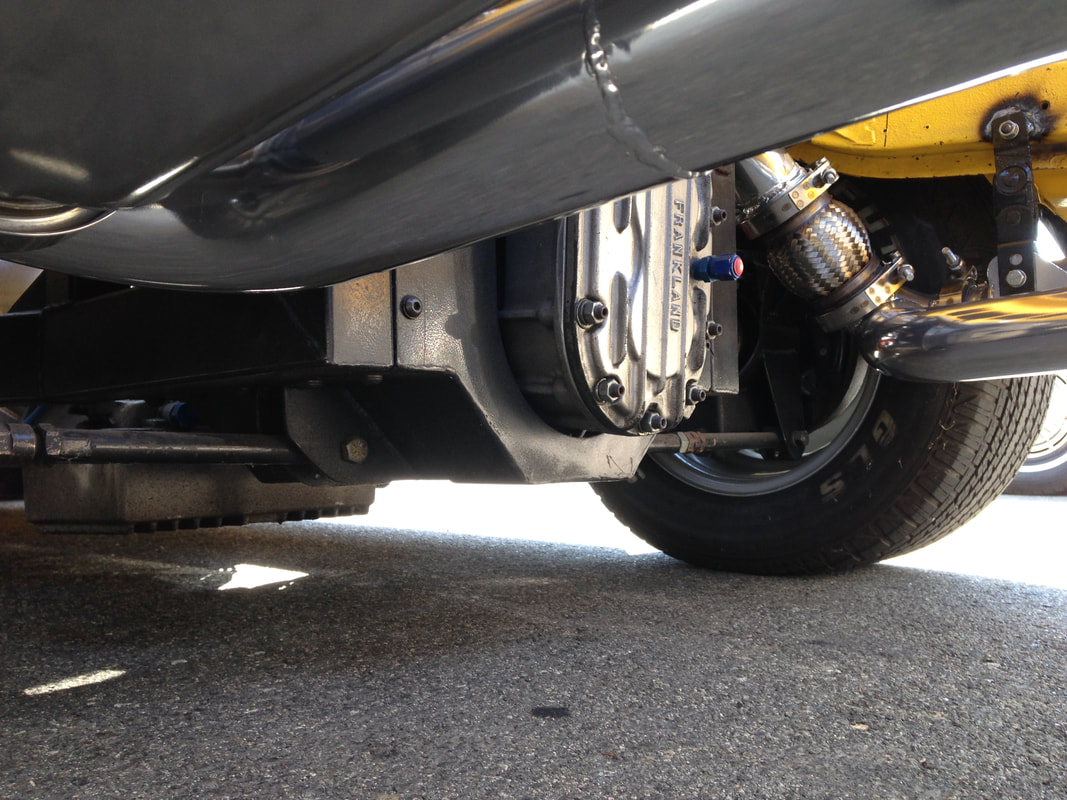 Phil is the former owner of VairyV8. Equipped as a SBC Close Ratio Saginaw, 3.08 gear, Crown car. VairyV8 is now owned by a racer named Ed in South Florida.

Hector and I drove our V8 cars from LA to Tahoe in July through the Mojave Desert up CA Highway 395. I had zero engine cover in the car at that time. Needless to say we had to stop about every fifty miles so I could soak myself with a hose. The chrome strip on the steering wheel and chrome shifter knob were so hot I had to wear gloves. But we hauled ass all the way up!!!

On the return trip I wimped out and rented a Ryder truck and trailer. That is Vairy on the trailer. Hector, Arch, and Chuck took turns riding shotgun in the air conditioned Ryder. What a blast we had!!!! The other picture is all the V8 cars on the roof of the parking lot at Tahoe.