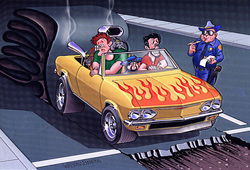 I was just a kid, back in 1969. No problem w/ trans. but I blew spider gears twice. That was before the 4 gear super diff. Also broke u-joints. I can say I did know how to drive smooth - I'm not bashing the drivetrain. We were going to get better parts in 1971. We started a race w/ 40 cars, Corvettes, Camaros, Mustangs, Challengers, Baracudas, the only Corvair. The rules at the time allowed any engine location if motor is same as manufacter. In that last race with the car we tried Hilborn Injection for qualifing. It had awesome power, but keep misfiring. (afterall it was for drag racing) We put the 1150 Holly 3 Barrel on it for the race on Sun.  We started 40th on the 1.5 mile, 5 turn track. At the end of lap 1 we were in 5th and moving to the front. On  lap two the brand new double roller timing chain broke. What was amazing was that I normally shifted that 327 @ 7500rpm. My crew said they were tired of me breaking the car. They insisted that I keep the rews at 5500 max.  I did that and still kicked ass.  A week later the club (not SCCA) rewrote the rules completely outlawing the Mid-engine Corvair.  That same club is still racing today under the name FARA. They only race at Miami-Homestead track. I talked to some of the oldtimers at the Homestead Trans-Am race in March. They remembered me and the V8vair as well as the regular Corvair I raced. In 1980 in a FARA I finished 7th overall and 1st place in GTU in a 40+ car field w/ 14 GTU cars. It was a 2 hour race, so don't tell me Corvairs can't finish a long race. Yahoo!
Al's Other Cars