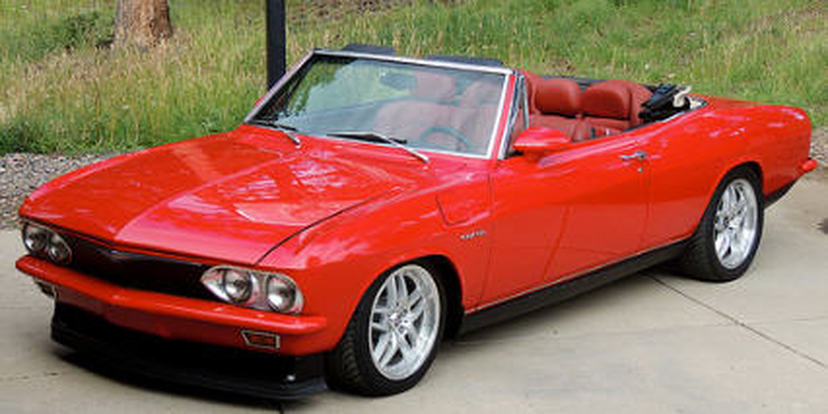 Chance (who admits he received more than a little assist from a mechanically inclined dad) chose a 1965 Corsa convertible as a base for his V8 project. They measured the latest GM small block family of engines and calculated that one could be shoehorned into the rear compartment of a Corvair. Introduced in the new 1997 C5 Corvette, the Gen III small block is a highly-refined, compact alloy V8 package that has won acclaim in engineering circles. Chance selected a 320 BHP 5.3 liter version from a GM truck. For vertical clearance the tall truck intake manifold and deep oil pan were
swapped for a low polymer LS1 intake and Corvette “batwing” oil pan (they’re cool-looking, too!). Sticking with the “update” theme, a lost 1982 Porsche 911 gave up a 915-series 5-speed transaxle with electric speedometer output for the project. Seems the folks at Kennedy Engineering produce adapters that allow the Gen III V8s to be bolted to anything from Austin Healey to Zagato, with Cessna and John Deere included in the middle... You may recall that the Corvair transaxle is a stressed unit, serving as both front drivetrain and suspension mount. This is where the fun starts: The Porsche box has no load-bearing duties as built, so mounts and adapters had to be designed and fabricated from scratch.
As you would expect, a complete front-radiator cooling system had to be designed, built and plumbed for the package. Chance has elected to go with low air inlets to preserve the Corvair’s stylish nose, using the deep spoiler to direct air to the radiator.  Fifty-year-old Corsa instruments don’t communicate well with the V8’s engine management computer, so Chance grabbed a dash assembly from a late salvage-yard Pontiac GTO. While he was at it, he also grabbed the plush GTO seating package and adapted the whole shebang to the Corsa convertible. The narrow GTO coupe’s rear seats are particularly noteworthy for fit in the narrow rear seat space and the function of the top is just like GM planned all those years ago. The end result is a car that looks like something Pontiac might have put it together as a concept mule in the days before GM pulled the plug: Imagine taking one of the best GM chassis packages and combining it with new powertrain hardware. Somehow, it’s fitting that Chance has combined these two GM orphans into such an interesting mix! 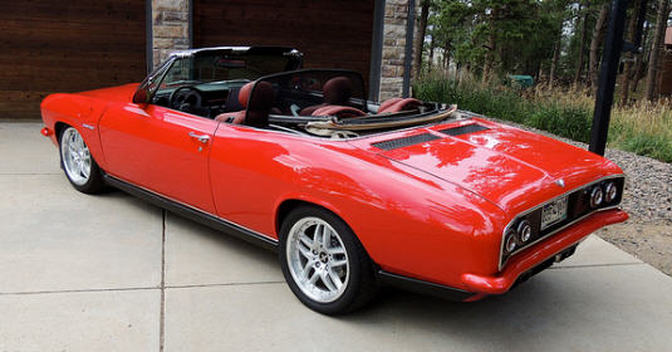