It's a roadster. Don't let the top fool you. It's removable, thanks to some extensive reworking. More on that later.

The customized Monza is both bold and subtle, like its racing stripes. The re-engineered nose incorporates round 7" sealed beam units in place of the stock arrangement of quad 5 ¾-inch headlights. Adding to the lumen count is a pair of high speed driving lights mounted front and center and hinting that this roadster is purpose-built.

An air dam limits airflow under the car and helps direct cooling air into custom grille work seemingly inspired by the '67 Camaro (which in turn, you can argue, grew out of the Corvair).

Air ingested through the nose is quickly put to work through a lightweight, large capacity radiator before being exhausted through NACA (National Advisory Committee for Aeronautics) ducts in the deck lid. According to Archibald, much thought went into the placement of these ducts. He explains that high and low pressure areas exist around any car as it motors down the highway. The exact location of the transition from high to low pressure varies depending on the shape of the automobile. The transitional area over the hood of a late model Corvair begins along the front axle line. The shape of the ducts is essentially triangular, deeper at the front and center, and more shallow toward the rear. This directs the warmed air from the radiator to the sides of the vehicle instead of allowing it to tumble over the windshield into the passenger compartment. At speed, the warmed air can be found at arms length along the side of the car. Further isolation of the driver and passenger from heated air leaving the radiator cavity is accomplished by the removal of the stock fresh air intakes at the base of the windshield. 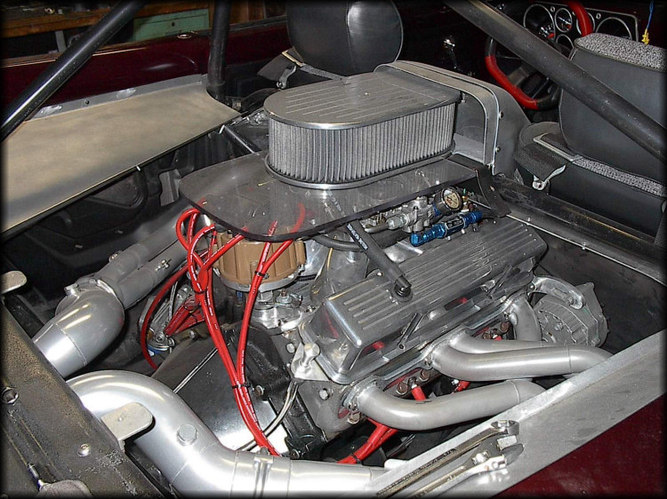 At the heart of the matter is a stroked 350 small-block. Engine displacement is increased to 383 cubic-inches though the use of an internally balanced, forged 400 cid Chevy crankshaft. Stroke is increased from 3.48 to 3.75 inches. Feeding those hungry cubes is a Holley carburetor built by Jones in Huntington Beach, California, capable of flowing air and fuel at a rate of 920 cubic feet per minute. An Edelbrock Victor Jr. manifold and matched Edelbrock heads carry the mixture to valves activated by an Isky camshaft, chrome-moly pushrods and extruded aluminum, 1.6:1 ratio roller rockers. The engine makes 450 hp at the rear wheels and has run up to 7400 rpm on a chassis dyno. The only reason this 383 can achieve these numbers is because it's internally balanced, blueprinted, ported and polished and has 6-inch H-beam Eagle connecting rods and forged JE pistons.

Earlier, we saw how intake air was routed to the engine through a plenum from the front of the car, passing through the cockpit via the center console. In the picture below, we see the air inlet where it arrives at the air box/air-cleaner assembly. That's ram air from the front in a mid-engine car!

Under the air-cleaner, a piece of acrylic forms the base of the air box. Plexiglas was chosen so the engine and its mechanics could be easily viewed. Ignition comes from a reworked GM HEI unit firing into 9-mm wires. The exhaust headers were custom made by Doug Holmberg, who made Carroll Shelby's headers for the Cobra cars of the Sixties. The primary tubes are 2-inch id (inside diameter), stepped with a 4-inch collector, all equal length with an X-pipe. They are aluminum coated inside and out. Archibald prefers aluminum as opposed to ceramic coating because the bond improves with each heat cycle.

The fuel system is a Bosch return system in which the electric fuel pump over-provides fuel to the carburetor with the excess returned to the fuel tank via a separate line. The pump's head pressure is 120 psi (pounds per square-inch). A regulator near the pump reduces the pressure to 35 psi and a second regulator (shown in the picture) further reduces fuel pressure to 6.5 psi at the carburetor. This configuration was suggested to Archibald by Bonneville record holder, Oz Cheek, and it ensures the carburetor never starves for fuel.

At the front of the engine, the only accessory is the alternator. No frills...all business. Bolted to the rear of the engine block, we see the incorporated bell housing of an Art Carr full size Powerglide transmission with 2400 rpm-stall converter. The differential is a beefed up 4-spider, 3.55:1, Corvair Positraction unit.
The removable top was an engineering nightmare. It uses full glass, not acrylic. The side panels are flat with the frame making up for the curvature of the original glass. It is attached at the windshield using a header bow from a convertible welded to the same roof that was cut from the car, and factory convertible latch mechanisms. Mounted in the rear pillar area is a cam-lobe which captures a pin welded into the inner body structure.

Chevy fans are quick to recognize the hot-rod Corvair's wheels as Z-28 rims from the 2nd generation (1970-81) Camaro. The tires are T/A radials; 225/50/15 at the front and 245/50/15 at the rear. Happily, it was not necessary to modify the car's inner and outer fender wells to accommodate these sizes.