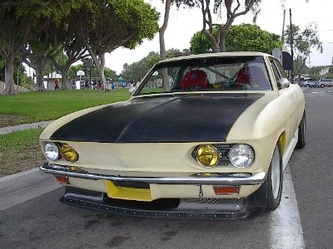 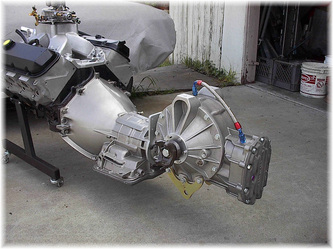 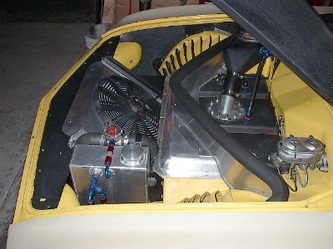 The SuperVair/R prototype is the culmination of Archibald Evans's 35 years of experience in building many late model V8 Corvairs. This street-legal race bred performance automobile is an exercise in R&D to prototype components for manufacture and sale in kit, rolling chassis and turn-key form. It's Brodex Big Block promises to put out 650hp regularly aspirated and 1000+hp with turbo-charging. The 3rd generation multi-link coil-over suspension indicates a skid-pad of 1 full “G”. The ADELLC quick-change trans-axle is all but completely bullet proof with a seemingly limitless final drive ratio. In current configuration regularly aspirated quarter mile times potentially dip into the mid-9’s at an expected 130+mph with
a top speed of over 200mph. Several iterations of trans-axle and suspension have been developed in conjunction with the SuperVair/R prototype in an effort to diversify and economize production.

In 1967 Ted Trevor of Crown Mfg. in Costa Mesa Ca. started to offer mid-engine V8 conversion kits for the late model
Corvair. A small block Crown CorV8 ran in the ’68-’69 Can-Am series and was in 7th place nationally against Lola’s and Chaparral’s when a crash took the car out of the series late in the season. John Player sponsored a mid-engine V8
Corvair during the same time period which won an astonishing 41 out of 49 races in a single season. A Crown CorV8 ran in the 24hrs of Riverside in the early ‘70’s finishing just laps off of the leader. David Macintosh and Mike Levine starting from 14th not only won their class but the field as well in a sanctioned SCCA event during the mid-70’s, it should be noted that a McLaren started the race on the pole… In 1969 Hot-Rod magazine tested a customer prepared street Crown V8 Corvair which had a 350 hp 350 ci 4spd installed a-mid-ship that went 12.22 at 105mph in the quarter. The same configuration
street CorV8’s built by Ted Trevor at the time were going 11.6 at 122mph. The one Big Block car Trevor built went 10 seconds flat. Road and Track magazine referred to the mid-engine V8 Corvair as a “street legal group7 race car”, yes they were and still are…

The SuperVair/R prototype is the blue-print for an all American made super car to rival Porsche, Ferrari, Lamborghini, Saleen and the ilk at a fraction of the price. The better part of a decade and $250,000 have been invested in the SuperVair project to date. It is my hope, intention and dream to build Super Corvairs as an alternative to the current performance
super cars. Finished small block cars will sell in the high $50,000 range and up with Big Block cars starting up in the $60,000+ range and turn a profit. There is nothing as unique that will perform for the price…

Rims and tires: front 15X7” Rallys with 225x50x15 tires, rear 15x10” Rallys with 295x50x15 tires
A Little History About Arch
Archibald Evans grew up with Corvairs. Before his second birthday he rode in a 1960 Corvair sedan owned by his father, Archibald, Sr. The senior Evans was intimately familiar with Corvairs, and not just because he owned one. His investment in the car was much greater than the sticker price. As one of the General Motors engineers assigned to the Corvair project during the mid-to-late-'50s, he invested his career efforts in the development of Chevrolet's rear-engine compact as it was prepared for introduction to the public in the fall of 1959.

During his tenure at GM's Chevrolet Division in Detroit, Evans car-pooled to work with a fellow Chevrolet engineer, Ed Glowaki, who at the time was promoting the Corvette racing program within Chevrolet. Stories  of traveling perpendicular to the boulevard on the way to and from work with Ed at the wheel of his street driven race Corvette became Evans family folklore.

So, we're talking about a father-and-son thing here. Evolution...starting with the excitement and romance of an epic era at Chevrolet being passed down a generation to someone who would carry the torch into the 21st century. The Evans' family Corvair story didn't end in Detroit. Their first Corvair took them to Denver after Evans accepted a job with Martin Marietta to work on the Mercury and Gemini aerospace programs. Later, Evans' work took him to California, and the little sedan was pressed into service carrying the family over the Rockies to a new home in Los Angeles. It was 1965 and time for a new car, and a 1965 Monza was chosen, Sierra Tan in color, equipped with a 140 hp engine, 4-speed stick and factory air-conditioning. The added excitement of the late model Corvair fueled a love affair that eventually included several more Corvairs including the top-of-the-line Corsa.

By the time the younger Evans was in junior high school, he wanted to build a really souped-up Corvair. At 18 and against the advice of mid-engine Corvair guru Ted Trevor, he stuffed an Ed Pink big block Chevy engine into the back seat of a late model Corvair sport coupe. Ted Trevor, as mentioned in the Corv-8section of this site, was the owner of Crown Manufacturing Co., Inc., of Newport Beach, California. In the late '60s, Crown brought a conversion kit to market making it relatively easy to shoehorn a Chevy V-8 into the back seat area of the late model Corvair, adapted to the stock transaxle. Crown experimented with both the small-block (327 and 350 cubic-inch) and big-block (396, 402, 427, 454 cu. in.) and determined the big-block variant was a parts breaker. The torque of the big engine was too much for the 'vair transaxle.Archibald reconfirmed Crown's findings, breaking his share of transaxle components before eventually moving on to a conversion based on a stroked small-block.

Archibald's Newest Project
Either a coupe or convertible, both require stiffing the coupe of course more so because the roof is structural. There was a fellow I knew years ago who put a really heathy small block a mid-ship in his late model 4spd convertible and on hard acceleration the convertible chassis would flex so much the passenger's door would open... The roadster I built (now owned by Randal Hinkley) was originally a coupe. When completed it had widened rockers and a 48 point tube re-enforced chassis. I'm building another but starting with a convertible not because it's any easier but just because I have one. This car will have a 'T' top and nacelles ah-la Porsche GT. It will sport a de-stroked Big Block and a Big car Saginaw 4spd mated to a C5 diff using the Sag to C5 adapter I make. If any one is seriously considering doing a removable hard top Corvair have them contact me and I'll go into detail on how-to... ADE.
Arch's Supervair has been sold and now resides in Kansas City.